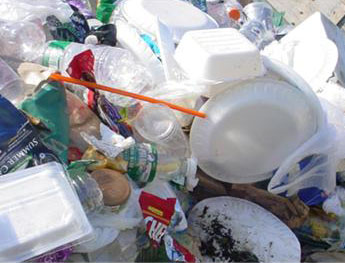 On November 19, 2012 the Town of Amherst Massachusetts passed a bylaw prohibiting food establishments and Town facility users from dispensing prepared foods to customers in disposable food service containers made from expanded polystyrene (EPS commonly referred to as Styrofoam®), effective January 1, 2014.   The by-law was proposed by the Town's Recycling and Refuse Management Committee, in collaboration with The Amherst League of Women Voters, and The Hitchcock Center for the Environment.  Copy of bylaw

While inexpensive to purchase, EPS is bulky and does not break down in landfills.  Styrene, a key ingredient, was recently recognized as a carcinogen by the U.S. Department of Health and Human Services.  Some argue that EPS has a small environmental footprint because it requires very little energy to manufacture, but this argument ignores the rest of the product's lifecycle, which includes factory worker exposure,  a very limited period of use, and disposal with large volumes filling dwindling U.S. landfills or being incinerated locally with the risk of toxic emissions into the air we breathe.  Economically and environmentally viable recycling options have not emerged despite vast quantities being readily available for decades.  See Ten Reasons to Avoid Foam Products for a summary of the motivations behind Amherst's ban.

Amherst joins a host of other U.S. municipalities who have taken steps to reduce the proliferation of inexpensive, single-use plastic waste in their communities.  Locally Nantucket, Brookline, Great Barrington, and Somerville Massachusetts, and Albany, New York have banned use of EPS to dispense food.  Over 60 Californian communities, Seattle, Portland, New York City (effective January 2015), and Washington D.C. (effective January 2016) have also banned its use.

FAQ's about the project are presented below.  Scroll to the bottom of the page for links to various articles and websites with related information.


Why is foam problematic in landfills and at incineration facilities?
The plastic industry often cites EPS as a percent of municipal solid waste by weight--a misleading statistic.  While EPS is extremely lightweight (it is comprised of as much as 90% air), it is also extremely bulky. In a landfill environment, ten pounds (the weight of five reams of 8.5x11” computer paper) of foam takes the space equivalent to a household refrigerator. It “photo degrades,” or breaks into smaller pieces over time when exposed to light (which is absent inside of a landfill).

Our three local landfills (in South Hadley, Northampton and Granby), are reaching capacity and are expected to close within several years.  Trash volume will become a more important issue as Amherst seeks other destinations for its trash. One Amherst waste hauler takes material to Seneca Falls, New York (265 miles away), and recently the DPW received a financially attractive offer from a landfill in the state of Georgia.

According to the MA Department of Environmental Protection, about 50% of Massachusetts’ municipal solid waste is incinerated.  While this eliminates the landfill volume challenge, it could be creating potential air-quality issues.  If inhalation of styrene causes cancer, do we want to be burning it—even in a controlled environment?  We are not yet confident that the existing filters on local waste-to-energy plants are removing all harmful emissions.

Why can’t we recycle it?
While it is possible to recycle EPS, there is not a big market for the material and financial and environmental costs make it unsustainable.  EPS is likely less expensive to produce than to recycle; few U.S. EPS recycling facilities exist (many of them owned by the foam industry).   Collected EPS is typically shipped long distances for densification (about 75 miles) prior to recycling, and food residue is considered a contaminant, so fresh water and soap/solvents are needed if one is to recycle EPS which has come into contact with food.

Why pursue it now?
In 2011 styrene was classified as carcinogen by the National Toxicology Program (NTP), a division of the U.S. Department of Health and Human Services.  People unwittingly put EPS containers in microwaves, in wood stoves and on top of campfires.  Vapor inhalation appears to the major concern at this time, but the NTP report says it may leach into food and drink.  Sufficient studies have not yet been performed.

The recent success (and relative ease) of the Taste of Amherst’s move away from plastic use in June 2012 demonstrates that change is possible.  Prices of EPS alternatives continue to decrease, and many of the restaurants we have spoken to are interested in eliminating EPS products.

We consider this ban part of a larger vision for Amherst’s waste.  We want to make sustainable choices, which means reducing unnecessary discards and removing all resources (organics, recyclables, etc.) before we bury or burn our trash.  This ban is the first step in a more comprehensive project to reduce our solid waste stream (and footprint).  We consider EPS “low hanging fruit” because substitutes are available, it holds health risks, is easy to identify, and is used by only 30% of Amherst's restaurants.

How it will affect local restaurants and food providers?
Our working team found that 70% of Amherst restaurants do not use disposable EPS products.  Amherst College, Hampshire College, and UMass have removed EPS disposables from their dining halls.  The migration away from EPS is already underway.   EPS is inexpensive, so the primary business owner stumbling block is cost.  The price differential between EPS and non-EPS products continues to decrease, but ban supporters must be willing to absorb a few cents of additional cost for recyclable or compostable take-out containers.

National Toxicology Program's 12th Report on Carcinogens (2011)
Look for styrene on the front page.  The one-paged "Fact Sheet" is helpful as well as the "Substance Profile" document.  The "Final Background Document" is 500 pages long, but provides in-depth discussion about styrene and food.  Find it by navigating to "Scientific Reviews." Look for Section 2.3.4, "Food."